The Bronze Statue of The God from The Sea

The ancient Greeks were very happy when they discovered bronze. Not only did they now have a material to make some pretty nifty weapons and armor out of, but their artists found the stuff to be perfect for making works of Art. Another plus side to this new metal was that it was hardwearing, and bits didn’t break off, such as arms and heads, as they did with marble and stone. As long as you got the clay mold correct then you were onto a winner. It’s a material that is still very much used today by modern artist like https://www.gillparker.com/ and her work of Bronze Wildlife Sculpture. There is one example of Greek Bronze work that has caused a fair bit of debate. It is the Artemision Bronze known as “The God from the Sea” as it was discovered off the coast of Cape Artemision and it is of a God but the problem is which one? 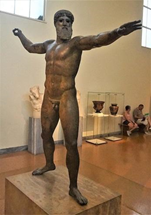 The debate rages over whether it is of the God Zeus or the god of the Sea, Poseidon. It is having been found in the sea is apparently not enough evidence that it is Poseidon as no one knows how it ended up in there in the first place. It may well have fallen off a boat that was shipping it somewhere (which must have really annoyed the person who bought it). The figure is of a naked male, who plainly works out a lot, with an outstretched left arm designed for getting an aim on a distant target. The problem is although it is obvious that God is looking to throw something pointy from the right arms position what that pointy thing is has been lost to the elements. This is a bit if a headache for Art historians as they can’t be sure if he is preparing to lob either A; a trident thus making him Poseidon, or B; a lightning bolt confirming him as Zeus. 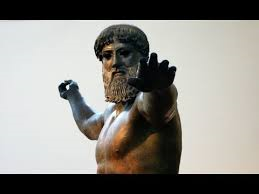 This sort of thing gets academics a bit hot under the collar. One of the most popular arguments is that there are lots of other statues, similar to the Artemision, of Zeus unleashing a lightning bolt. Another mark in Zeus’s favor is that if it were a trident it would have obscured the Gods face. However, a large number of Poseidon headed coins were found nearby suggesting that there was a big Sea God theme possibly going on. One other popular theory for the coins and the statue’s location is that it was being stolen by the Romans!