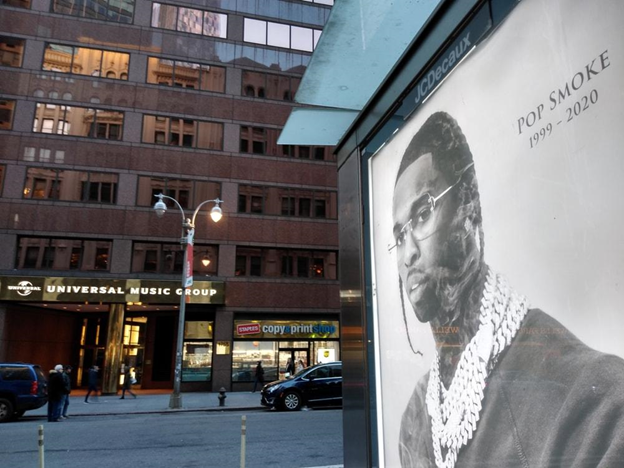 Finally, a real change to the music charts. Unfortunately, the artist who made the change is no longer alive to see it. Music Maven’s proprietary technology — which provides the most current and accurate data on the performance of all artists and songs in daily music charts — demonstrates that on the July 4 weekend, the late Pop Smoke smoked the pop charts with his posthumous album, Shoot for the Stars, Aim for the Moon.

Following the extremely rapid rise, and equally tragic demise of other artists, including XXXTentacion in 2018 and Nipsey Hussle in 2019, Pop Smoke was shot and killed during a home invasion early this year in Hollywood Hills. The February 19, 2020 murder remains unsolved. He had been renting a home of one of the members of The Real Housewives of Beverly Hills, the address of which appeared on social media, making the address of his growing opulence known to those lying in wait.

The Brooklyn-born son of Jamaican and Panamanian parents literally shot for the stars and aimed for the moon. As part of a style that has become known as Brooklyn Drill, based in Chicago Drill, exported to London and imported to Brooklyn, Pop Smoke was one of the fastest rising starts in music. He also promised to bring New York back to prominence or dominance in hip-hop. Like XXXTentacion, he was only 20 years old when he was shot and killed, and his posthumous chart performance has also been significant, as proven by this weekend’s charts.

Music Maven’s data shows that Pop Smoke is The Most Streamed Artist, with 24.8M streams on the first day of his estate’s release of Shoot for the Stars, Aim for the Moon on Friday. That is four times higher than his next competitor, Lil Baby with 6.2M streams, the number one artist for most of last month, June 13-28, since his release of “The Bigger Picture” on June 12. Keep in mind that no artist garnered more than 6 or so million streams on any day last June because no major artist released any major album last month.

The only major artist to release a major album since the death of George Floyd on May 25, was Lady Gaga, whose Chromatica won her 17M streams on its first day. This means that Pop Smoke did better than Gaga and the other most recent major releases, Future’s High Off Life, with almost 20M streams on May 15, and Gunna’s Wunna, with 13.5M streams on May 22. This means that Pop Smoke’s latest is the highest streaming debut since Drake’s Dark Lane Demo Tapes won him 35.5M streams on May 1. Because of the pandemic, lockdowns, the economic downturn, and the protests over race and justice, artists and labels have not released albums with any impact to the charts for over a month. It may be a sign of the times that a living artist has still not dared to do so, and that the only artist with such an impact is no longer alive.

So far Pop Smoke’s posthumous success has been overwhelming. Eighteen songs from his album — his first full-length since the prior albums from this and last year, Meet The Woo and its sequel, were EP’s — are on the top fifty of Music Maven’s Most Streamed Songs chart. Those include “For the Night,” featuring Lil Baby and DaBaby, two artists that have been in the top three most streamed over the last month, at 2.2M streams, “Got It On Me,” at 1.8M, and “The Woo,” featuring 50 Cent and Roddy Ricch, at 1.4M. It will take time for these to compete with his dominant single, “Dior,” at 126M streams on Spotify now.

The fate of the music created by subsequently deceased artists is a mystery. Compare Juice WRLD, still consistently far more listened to than most other musicians. He is still in the top five Most Streamed Artists now and has been for the last month despite his death last year and no posthumous album since before then. Or take XXXTentacion, gone for two years now, with two posthumous albums out, but none this year. XXXTentacion’s posthumous performance has been much more erratic than Juice WRLD’s, but he unexpectedly won the number one Most Streamed Artist rank twice in April and twice in June, despite typically rollercoaster-like chart fluctuations. For now, Pop Smoke’s success is a tidal wave, and it finally turns last month’s music chart downturn to a promising upturn.